Why I Vowed NEVER to Return to Confession! 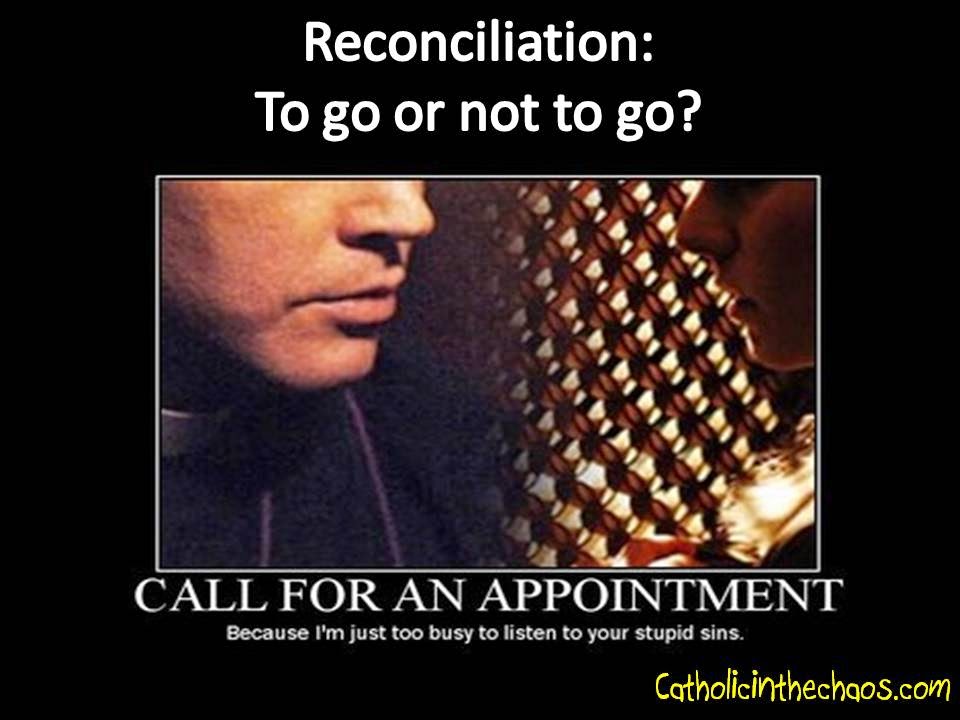 In college, I thought I would “stick it to my parents” by only going to confession once a month. Ha! Take that, suckas!  But once I began that slippery slope of allowing myself to slack on going to confession, I found myself, as I got older and older, making excuses not go to confession and easily fell into the trap of waiting several months between partaking in the sacrament of reconciliation.

Again, I didn’t think much of it because, well hey, I was going way more often than we are “required” to go so I must be doing alright.
Then it happened.  The traumatic experience EVERYONE fears will happen in the confessional, happened to ME!  Only a handful of people actually know this story, so…you won’t tell anyone will you (wink, wink)?
A while back, after a wonderful Lenten season and lots of prayer on my part in preparation for Easter, I was energized and on fire from the Holy Spirit. I was turning over a new leaf.  No more waiting a few months before heading to that wonderful sacrament of reconciliation.  No more excuses.  “I’m definitely going once a month if not every 3 weeks” I promised myself.  Why not go?  I feel so GREAT afterwards. I mean my sins are forgiven.  FORIGIVEN!  Not just forgotten, not just set aside. NO FORGIVEN.  The slate is wiped clean and I am as fresh as the morning dew and sweet as the smell of a baby’s bottom (well clean bottom that is). Heck yeah!  Let’s get my confession on, people!!

So a week or two after Easter, I found myself in the confessional on a lazy weekday morning.  There was no line.  No one was knocking down the door of the confessional to get in.  It was just me, the priest and Jesus.  Ah! It is gonna be a great day, I thought.

I began ”Forgive me Father for I have sinned! It’s been three weeks since my last confession…”.  Here I went, confessing my struggles over the past 21 days.  I’m feeling good.  This is going well I tell myself.  Why would I ever not want to go to confession? and I’ll never let myself wait so long again I drone on in my head.  All these great feelings running through me as I am confessing when it happened.  “Hmph, ARE YOU GOING TO CONFESS YOUR SINS SOMETIME TODAY?” was shouted at me from the other side of the privacy screen.  I stopped, frozen with fear.  Within milliseconds I think, Did…uh…did that just happen? Did the priest just interrupt me confessing my sins to yell at me for…NOT confessing my sins?  Oh NO HE DIDN’T!  Righteous anger came over me (as least I thought it was righteous). I sighed and shouted right back “GEEZ!”  Ok, ok, so it was not the best come back in the world.  But really, he was just LUCKY other words didn’t come flying out because boy was my brain fighting to keep them contained.  With my hands shaking from anger (and, let's be honest, a bit of fear), I went on and quickly finished my confession.

I know what you are thinking, Why the heck didn’t you just walk out?  Well the truth of the matter is that all this occurred probably within less than 10 seconds from start to finish of my confession (you better believe I said that act of contrition so fast his head was probably spinning).  I was just so shocked that it happened at all and it took all of my effort not to yell at this priest (my parents taught me well), that I just stayed and went through the motions I suppose.  Hey, nobody is ever going to accuse me of being quick thinking in a crisis, that’s for sure.

As soon as I heard the words “Go in peace” I booked it out of that confessional, ran out of the church and got into my car faster than I’d probably moved in a long time.  I cried and cried all the way home, coming up with some very clever quips I told myself I should have said, along the way.  Oh I’m so witty after the fact!

I was devastated. I couldn’t believe I got yelled at by a priest!  In confession.  For not confessing…fast enough?  I felt like a child being scolded by her parents.  I vowed to NEVER go back to confession again!  Never again would I let someone talk to me like that when I was at most vulnerable!  I didn’t want to feel alone in my anger and disappointment.  So I went to the closest "most reliable" (ha!) source to find others who have been in my shoes. I scoured the internet and read stories of people who had horrific, terrifying, traumatic reconciliation experiences and never returned to receive the sacrament in 10, 20, even some 30 years later.  So many stories!  So many people hurt at a time they are sharing all of themselves, the good, the bad and the ugly.  So many people pushed away from the Lord!  My head was spinning and my heart was broken for them because they never received the sacrament again (at the point they wrote those stories on the internet at least).

Then it hit me, like a cold wind smacking me in the face on an icy cold winter morning!  Could I NEVER go back to confession?  Could I NEVER receive this wonderful, blessed sacrament again just because of one man who either was having a bad day or was just a plain ol' flawed human being and a bad confessor?  Just the thought of never feeling that wondrous feeling I get after receiving the sacrament, the feeling of a weight lifted off my shoulders, the feeling as if I am lighter than air, made me stop in my metaphorical tracks.  No I could never deny Jesus the relationship He so desperately wants with me.  And that includes asking for forgiveness and being pardoned for my sins.

So, I decided I would work on building up the courage to go again “sometime” in the future.  In the meantime, I prayed for the priest that he also learned a lesson in the confessional that day and would show others a compassion and understanding he did not show me.  I still pray for him to this day whenever this story comes to my mind.

To be perfectly honest, it took me several months before I could show my face in a confessional again and no I never returned to confession with that priest.  But those feelings of fear, disappointment, and humiliation have not gone away.  Yes they have lessened a bit but are still all too present. If I just think about going to confession, I get butterflies in my stomach.  I finally understand the feelings of anxiety people have about confession.

In retrospect and after much time processing this situation, I do believe that the devil was at work that day (yes even in a church, I think he tries desperately to be at work).  I believe this experience was one way in which he hopes that I would cease going to confession.  Sadly for him, I have not and will not ever give in!

To those of you out there who have had an awful reconciliation experience, I want to let you know that I’ve been there.  I know how it feels to be humiliated at the moment you are at your most vulnerable.  But I ask you to never let one human being stop you from improving your relationship with Christ.  Thwart the devil’s plan by saying “yes” once again to the sacrament of reconciliation.  I promise you, the feeling you get after receiving the sacrament is so worth it!

To any clergy out there reading this I just want to say “Be kind”.  Yes you have many, many duties.  Yes you are tired and have to look forward to hundreds or thousands of confessions this Lenten season.  But please, please, be careful with your words as you have our hearts, minds, and souls (truly) at your disposal.  You don’t know what anxiety, fear and stress we had to conquer just to walk through that confessional door!  Do NOT push us away from the sacrament of reconciliation.  Just be Christ to us!

After all this serious talk, I thought I'd share this picture to lighten things up a little! 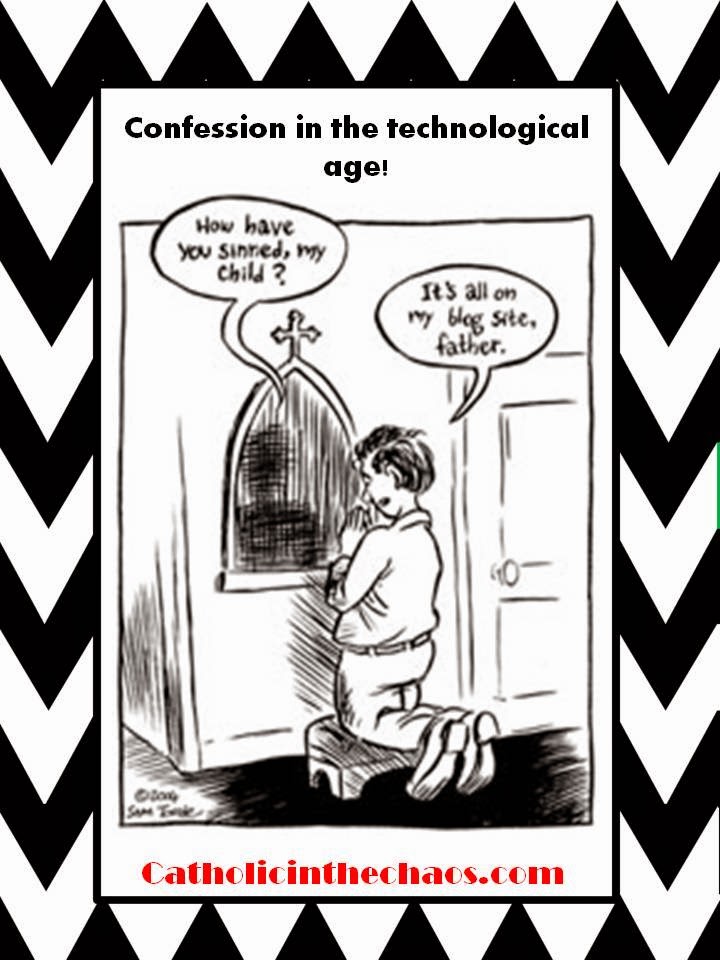 P.S. It’s not all gloom and doom.  Soon I shall share with you my very BEST confession experience (which has just happened recently), so stay tuned and look for that in the next few weeks.