Rosary Meditation: The Scourging at the Pillar 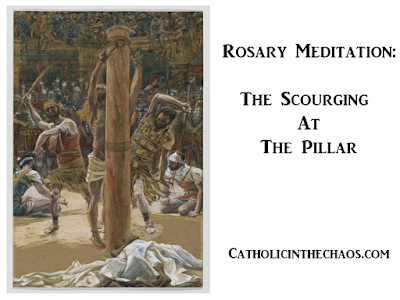 The Scourging at the Pillar

Jesus is pushed, pulled and dragged along the streets of Jerusalem, like an animal until He reaches Pontius Pilate.  Pilate is a small man, clinging to his office of Roman Prefect of Judea.  He doesn't want any incidents that may cause scandal.  So he tries to hand off Jesus to King Herod.

Again, Jesus is dragged through the streets like a common criminal.  When he arrives at Herod's gates, the Lord God, the Word Incarnate, is greeted with barbarian curiosity.  Jesus is viewed as a spectacle to behold, as if those in attendance were viewing a circus act. Once again, our Lord is mocked and spat upon.  He's dismissed from the "almighty Herod" and sent back to Pilate to await His fate.

Pilate, annoyed by this nuisance, our Lord is now becoming to him, decides to appease the crowd.  He knows Jesus has done nothing wrong, but he is a spineless man.  So he orders Jesus to be flogged.

Jesus is tied to a pillar, His body bare.  And the whipping begins.  His skin is ripped open by sticks, whips and other weapons.  He is repeatedly hit over and over again.  Not 39 times as in Jewish law, but as many times as it took until the Roman guards were too exhausted to go on.  Was it 40 times?  50?  80?  100 times?  Over and over again He is whipped.  Over and over again, He gives His body up to God the Father for us, for our sins.  Through His wounds we can be healed.

Finally, the whipping stops.  But only for a short time, as Jesus our Lord is now turned over and facing forward now, looking straight ahead at the brutal faces staring back at Him with contempt, with pure hatred, the torture begins all over again.  Over and over again our Lord silently cries out to the Father.  Father forgive them.  Father forgive them.  No words are heard, but mercy is His plea.

The time has come where the guards are completely finished.  They have no energy left with which to beat our Lord.  With lacerations and blood covering His body, He is dragged and thrown into a holding cell, leaving a trail of blood, His most precious blood, behind Him.