Rosary Meditation: The Crowing of Thorns 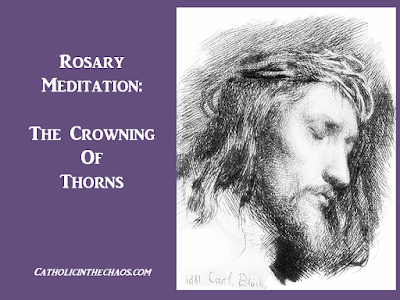 The Crowning of Thorns

Jesus is lugged back to a holding cell after the terrible scourging.  He has lost so much blood, it would be impossible for any of us to go on.  Yet He does.  The blood is beginning to congeal and some of His lacerations are beginning to close.  But not for long.

When our Lord reaches His cell, a crowd of guards are awaiting His arrival.  They surround Him.  He once again is alone.  They throw a red cloak over Him and find a cap of thorns.  They push it down hard on His head, laughing and mocking Jesus saying All Hail, King of the Jews!.  Blood drips down His face from every puncture wound each thorn makes.  His head is throbbing in pain.  His vision is blurry.  He sees flashes of light and shooting pain comes from behind His eyes.  Again, the Lamb of God, is spat upon, kicked, hit, humiliated.  Again He is brought to His knees writhing in pain.  But He doesn't shout out.  He doesn't complain.  He doesn't smite these lost souls so full of hatred for Him.

No.  Jesus, ever loving and compassionate, prays for them.  He prays for these executioners, these sadistic men who seem to be possessed with evil.  Our Lord calls out to God and prays for their souls' release, for their eyes to be open and for them to see the truth.  But it is not a prayer God the Father can answer right now.  Jesus knows He must complete His journey first.  He must take up His cross.  He must continue on.  He must show tremendous courage and fortitude.

Once the guards have had their fill, they rip off the red cloak and with it, all the skin and dried blood that had adhered itself to it. His wounds are now open and oozing again!  Oh, my Lord, Jesus when will it stop?!  When will we stop?! They walk away leaving Him shaky, sweaty, bleeding from head to toe with a cap of thorns fixed upon His head.

Time goes by and Jesus is finally brought back to Pilate.  By this time, it's later in the morning and the crowds are getting riled up by the high priests.  They begin to shout and protest.  Pilate, afraid a fight will break out among the crowd and get carried away, tries to appease them.  He shows Jesus off, pointing out the stripes He received from His scourging, much like a zoo animal is shown off by a zookeeper.  Pilate offers the crowd a choice, between Jesus and Barabbas, but the crowd refuses to give in.  They take Barabbas, a known murderer over their Lord, their Savior for which they have waited thousands of years..  Yet, they do not stop there.  They will NOT take NO for an answer.  They will be happy only when the last drop of this Lamb's blood is shed.  And so Pilate acquiesces.  He sentences Jesus to death; death on the cross.