Rosary Meditation: The Carrying of the Cross 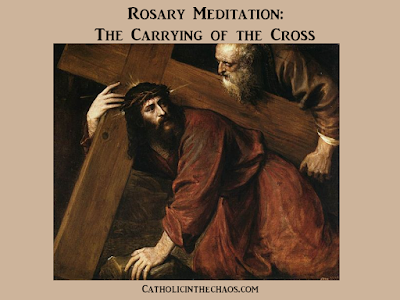 For the fourth station, I tend to meditate on the various scenes from the Stations of the Cross. I'll briefly mention them below but won't go into detail.

The Carrying of the Cross

Pilate just sentenced Jesus to death and a large crowd lines the streets of Jerusalem, waiting to catch of glimpse of the defeated, so-called "King of the Jews".  They are curious but they are also thirsty for blood.  The gates open and the guards are rushed by a crowd of men, possessed with hatred for Jesus.  The guards push the men back.  Jesus looks around.  He sees the crowd of people.  His people that only 7 days ago, welcomed Him into these streets while waving palm leaves as He rode a donkey.  How can hearts be turned so quickly?  How can man be so fickle?

Two guards drag Jesus' cross and place it on His back.  He wraps His arms around His cross, embracing it.  With eye closed He takes a deep breath and for one quick moment, He finds peace.  He knows this is what He was made for. So Jesus takes up His cross and stumbles down the street.

As He walks, the crowd begins to close in on Jesus more and more.  They are waiting for a moment of weakness. Just one.  And it's not long before they get it.  Jesus falls the first time.  The crowd rushes at Him, kicking and stomping on Him.  Cursing at Him.  Guards spend several minutes trying to break up the crowd.  At last, the beatings stop and Jesus has no time to recover.  He is whipped and a guard yells for Him to stand.  He takes up His cross again.

Jesus walks a short while when He sees His mother, there in front of Him.  She stands in the middle of the street.  They make eye contact and she imparts all of her strength to Him.  He knows now.  No I am not alone.  You are here, my mother.  We can do this together.  We can save this world.  Oh the pain in His mother's eyes is not for herself but for Him.  How she longs to take Him home with her, to clean Him up and nurse Him back to health as any mother would.  But something is communicated in the split seconds they have together.  No, mother.  This is the time.  I must complete this journey.  And Mary responds Than I will stay with you.  And that is enough for Jesus to keep going.

He stumbles and falls again, but this time the guards are ready for the encroaching crowd.  They ward them off with only a few blows to our Lord's body.  Yet, by now He has lost almost half of His blood.  By now He should collapse on the street unable to get up again.  However, He stands!  Once again our Lord Jesus stands!

Jesus meets Veronica who wipes His face. He comforts the crying women of Jerusalem.  He finds time and strength to give even more.  He falls the third and final time but as He looks up from the ground He can see, Golgotha, only a hundred yards away.

Jesus gets up one final time, to complete His way of the cross.