Taking it to the Cross! 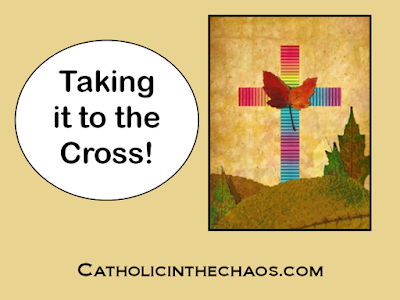 Life lessons seem to be coming from all sides some days.  Today I am ready to hit the sack at 7:30pm because I've simply had just that kind of day.  Little Bean is now 8 months old but still nursing throughout the night.  Pickle just turned 5 years old last month and we are coming up on the end of our first marking period next week.  I can't believe it's been almost 9 weeks since we have started school!  Hopefully I'll share some pictures with you from our homeschool adventures next week.  But for today, I'm just spending some time in reflection.

My life has drastically changed over the last 6 months and not simply because we've had another bundle of joy (which he has truly been such joy to us).  Rather, it's because my husband went on terminal leave several months before officially retiring from the army after two decades.  We bounced around for a few months spending time with family before settling down in our new state within 40 miles of my husbands new job.  Forty miles in terrible traffic equals hours on the road some days.  But, he's been taking time getting into the swing of things over the last three months with this job and we as a family have begun to get used to dad being back to work after all the time we were blessed with having him at home with us during our transition period.

The first few weeks of unpacking, infant separation anxiety, sleep deprivation and emotional outbursts from a preschooler who was desperately trying to find his bearings in his topsy-turvy world, truly tested this mama's resolve.  The chaos and clutter was closing in on me and my children were feeling my anxiety.  I ached for organization but between needing to hold my infant constantly while trying to reassure my preschooler that all would turn out just fine and we would in fact find new friends for him to play with, unpacking became a much greater obstacle than I could have ever thought.

We were on an emotional roller coaster.  Our days, much like Clint Eastwood's famous movie, were sometimes good, often times bad, and a few times, admittedly so, very ugly.  My husband was so busy at work that many times he would get home simply to eat dinner and see the kids off to bed.  To say we, my boys and I, were struggling is probably an understatement.  However, I'm the type of person that can only see the extent of the darkness with the sun's return.  When I'm in the thick of things, I simply put out immediate fires and deal with what's at hand (which incidentally is not the same thing as being good under fire...I'm terrible at that).  It's as though I can only process what is right in front of me and therefore can only deal with solution to those immediate problems.  There is no time for thinking, for reflecting or for silly things like emotion.  But I knew we were struggling and I knew for sure that I couldn't do it all on my own.  I had to do something I have done over and over time and again in my lifetime.  I had to return to the cross.

Simply praying during the day wasn't enough.  I had to stop in moments of anxiety, frustration or anger, silent those thoughts in my head that wanted to so desperately come tumbling out of my mouth, and get on my knees.  Some days I had to just kneel in the midst of a floor strewn with toys, a screaming baby, and a preschooler dancing around the both of us seemingly oblivious to the hearing-loss-inducing noise level that Little Bean could belt out.  Sometimes I had to go into the bathroom and shut the door.  It didn't matter where I was, it just mattered that I took it to the cross.

At first I asked our Lord and Blessed Lady to end this emotional ride, give me a break from this chaos and help Little Bean get some sleep and help Pickle find a few friends with which to play.  But I realized that I was wrong to pray like this because those prayers were requests to take away my suffering, my anguish in the moment and my suffering in watching my children in pain.  I came to understand, finally (like the good Catholic that I am...wink, wink), to offer up my suffering rather than requesting it to cease.  So my daily prayer became an offering of my suffering in union with our Lord on the cross.  It was a prayer asking Jesus to help me suffer well.

What a difference this change in prayer made for me!  I no longer focused on trying to make my children blissfully happy in a time I knew I couldn't do just that.  I simply chose to love them where they were.  I no longer dreaded the screaming and crying from Little Bean and began to accept and even anticipate his need to nap while I wore him practically all day long.  He really needed that bodily security that I was there with him at all times and I stopped trying to emotionally fight that.  I no longer felt annoyed by the constant noise and attention Pickle was seeking from me as he too required reassurance that he wasn't going to be left alone, that I would never leave him and that he too would one day find friends.  No.  My prayers became offerings.  Sacrifices for reparation of my sins and for conversion of souls (what a perfect time to do this since we were right in the middle of Lent...a "Godincidence" for sure).  I still had no time for myself, the boxes remained packed and the clutter continued to pile up.  The noise level didn't subside but my anxiety surely did.  Oh once I began to use these little infinite daily struggles, these moments of "dying to myself" as offerings, tiny gifts to our Lord, they no longer felt like a burden.  No longer did I feel like I was really suffering.  I began to feel joy in these burdens knowing I was offering, small as it might be, this little act of love for others which I felt was a consolation to Mary's Immaculate and Jesus' Sacred heart.  And the darkness, over the span of the next two months, began, ever so slowly, to fade.

Now that the sun is beginning to rise again, now that Little Bean is feeling more secure and taking naps without needing to be held or worn, now that Pickle is settling into his homeschool schedule, and now that most (notice I did not say all) the boxes have been unpacked, I am breathing a little easier, and I am able to look back and say, beyond a shadow of a doubt I could not have gotten through the last few months without the assistance of our Lord and Blessed Mother.  Although, I know that this darkness is far from being over as Pickle and I have yet to find a good set of friends for him or a social support system for myself, through this time of adversity, I am reminded that as long as I take all of my sufferings, joys, prayers and works to the cross, the Lord will carry me through the darkness and once again the sun will surely rise.

To all of you going through your dark nights, I pray that you will rely on our Lord and Blessed Mother.  Take it to the cross, where it all belongs!


Blessings to you and yours,