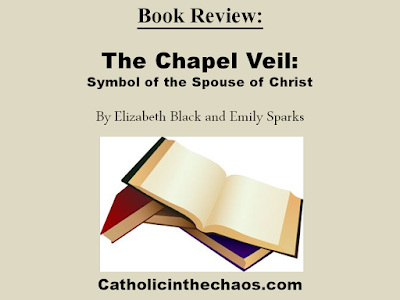 I just finished reading this very quick booklet titled The Chapel Veil: Symbol of the Spouse of Christ, which consists of two short essays written by Elizabeth Black and Emily Sparks.  I became interested in the theology behind "the veil" when I noticed a few women veiling at Mass.  I have not been exposed to much veiling previously, so as an adult to see a re-emergence of "veiling" was quite intriguing to me.  I, for reasons I can only attribute to the Holy Spirit, was drawn to these women and their exercise of veiling in Mass, however I had no understanding of the purpose or symbolism behind this tradition. 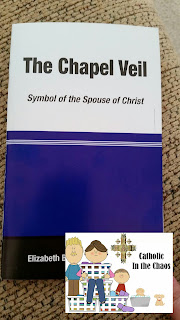 I suspect most of us are familiar with the scriptural basis for this tradition explained by St. Paul in Corinthians however we lack a true understanding of the context in which this chapter was written.   I have found a beautiful explanation here for this bible passage that makes much sense to me.  Again, I suspect, most of us were told since veiling was no longer required under the 1983 Canon Law, it was no longer necessary or we were indoctrinated with a terrible falsehood, that veiling was an outward sign of subordination to man, which is FAR from the truth!  Whether veiling be of necessity or not, I believe Mother Church, in her wisdom, provides each woman with the choice to decide this for herself.  Yet, what I needed to understand was, what this veil tradition was all about?  Why did it begin and why did the church require this tradition for 2000+ years before leaving it up to each woman to decide for herself?

By divine grace, I somehow became acquainted with a woman who veiled and suggested I order this booklet to learn more about the theology behind veiling. Upon reading it, I have come to realize the true beauty behind this tradition.  I recommend anyone who is interested in understanding the theology behind veiling, order this booklet and learn about this tradition for themselves.

This booklet is short, sweet, to the point and affordable.  The essays are easy to read and comprehend.  Within a few minutes, you will come to understand the reasons women all over the world continue to participate in this beautiful tradition!

Blessings to you and yours,