Our Blessed Mother and Infertility 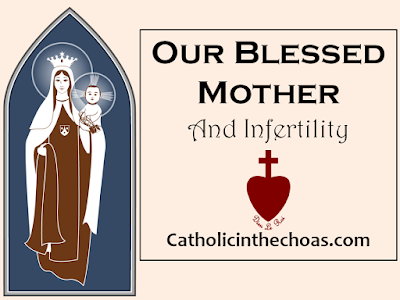 As I was meditating on our Blessed Mother's life and her true devotion to our Lord Jesus Christ while praying the Chaplet of the Immaculate Heart of Mary, a thought came to me, a revelation if you will. When praying or meditating on Our Lady, I tend to think of her in two capacities: either as my spiritual mother, or as another mother/friend/model of the woman the Lord is asking me to emulate.  Hey, I never said I was good at imitating her, just that I know I should! ;)  But while praying one afternoon, another thought actually came to my mind.  Mary is also a woman who knows what infertility feels like.

I know you are saying "Um, Maria, have you lost your mind?  Mary carried our Lord into this world.  She had a baby, how in the world could she even understand the depth of my pain and frustration with infertility?".  If you are reading this blog post and asking just that, let me first say how very sorry I am that you are experiencing such a cross in your life, but that I do believe that our Mother Mary is THE woman you can go to with such a cross.

Yes it is true that Mary, only through her fiat, was granted the gift (and cross) of being the mother of our Lord, Jesus which eventually resulted in her becoming the Mother of Heaven and earth.  However, have we ever really thought about what that "yes" entailed for Mary, for her body, for her marriage, for her life as a woman and mother?  Have we ever really thought about the fact that because her womb bore God's only son that she could NOT bare any other children?  I know some denominations mistakenly read certain passages of the bible as Jesus having siblings and assume they are from Mary but as the Catholic church teaches, Jesus Christ, was Mary's only biological child.  There are a number of reasons for this and a number of historical resources, including scripture to support this and maybe one day I'll be able to take time to discuss it in detail but for now, this is what we, as Catholics KNOW to be TRUE.  Mary never carried another baby in her womb.

Those of you who have never been able to conceive or carry a child to term, will retort with, but she at least had Jesus.  That was some consolation.  And I cannot disagree that I'm sure His life, His ministry brought great joy to her as well as great sorrow.  Let us think about this for a second.  Mary was espoused to the Holy Spirit the moment she said "yes" to our Lord.  But she also knew that her "motherhood" was limited in a sense far greater than ours.  When presenting Jesus in the temple, Mary was told she would have swords of sorrow pass through her heart.  Mary had to escape to Egypt in the middle of the night like a thief, in order to keep her divine Son safe.  She lost Jesus for THREE DAYS in Jerusalem at the time of year where millions of people converged on the town.  She felt the hopelessness and failure, the despair and embarrassment.  While raising her Son, she learned very quickly how our Lord had to live here on earth with one foot in Heaven.  Then of course, she had to stand by while He was taken in the dead of night, trialed unjustly by the high priests, scourged by Roman soldiers, beaten, hit and spat upon while carrying His cross, pierced by nails in His hands and feet while trying to breathe in excruciating pain, and finally, His mother had to look on while Jesus took His last breath followed by a spear thrust into His side.  What a motherhood of pain and suffering!  Do you think the "good days" were true consolations to her heart?  I wonder.

So Mary's motherhood was plagued from the beginning with sorrow and pain.  In addition, Mary was never to conceive again.  She would never feel what natural conception felt like.  She would never have a child that was the result of the union between her husband, Joseph, and herself.  She would never have a child she did not have to share with the world.  Her uterus would be barren for the rest of her life.  Can you not imagine the pain, the aching Mary probably felt at times longing for a chance to have another child, one she knew she wouldn't have to give completely to God?  A child that could grow up to take care of her and help her in her old age?  A child she didn't have to "give back" so quickly?  Oh, I think Mary most definitely knows what infertility feels like!

If you are experiencing infertility of any kind, I encourage you to take your pain, your burdens, your sorrow to Our Lady.  She was not divine.  She was human just like you and me.  She knows exactly what your pain feels like.  Lay these pains at her feet and allow her, through the grace of the Holy Spirit, to bare fruit in your life.  It may not be the fruit you are requesting or hoping for, but it will undoubtedly be the fruit you need.


Blessings to you and yours,