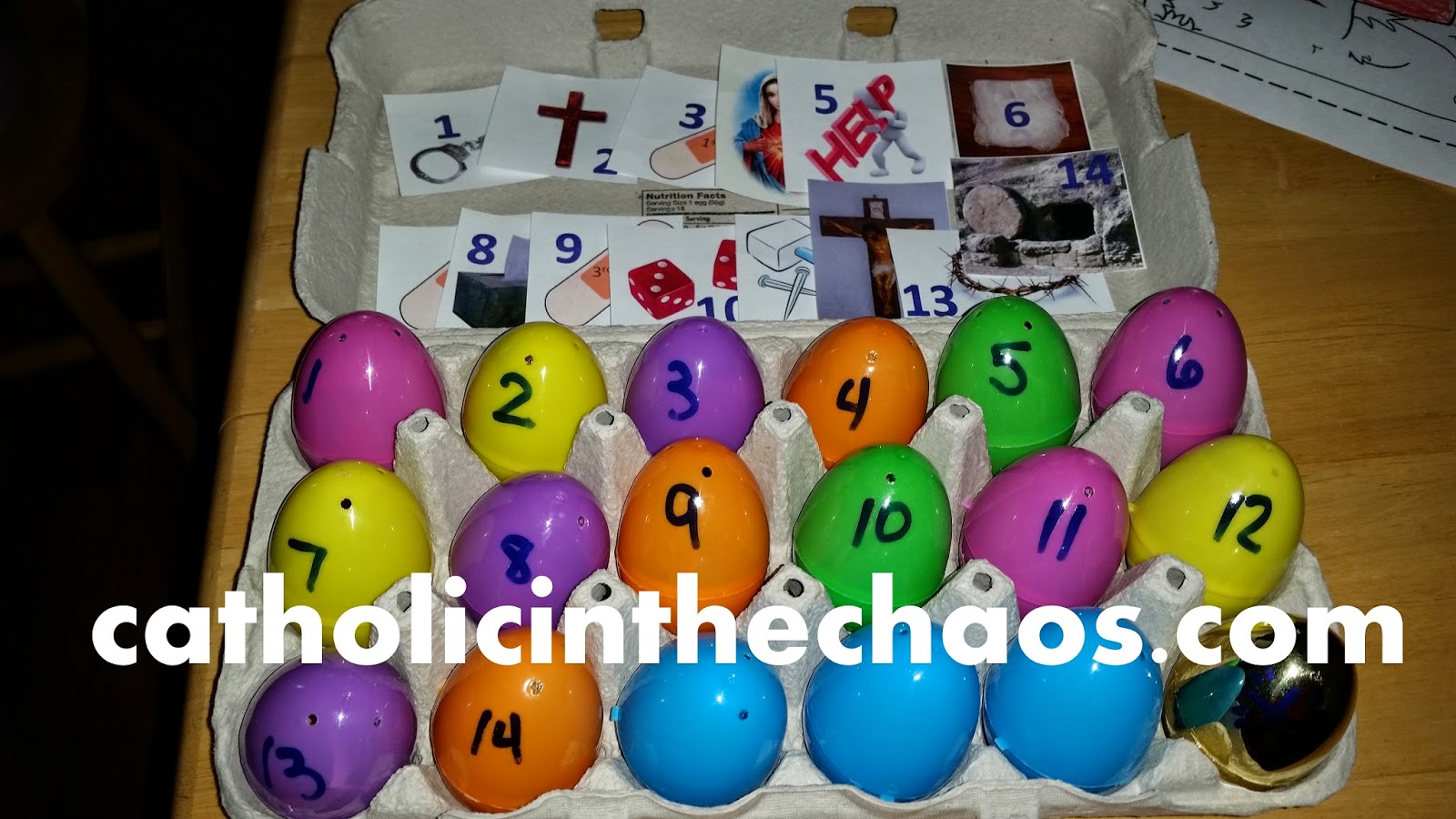 I was inspired by Catholic Icing's brilliant idea to use plastic Easter eggs to introduce and pray the Stations of the Cross with little ones.  So I decided to make our own version of this set.

I'm a fan of bright colors so as you can see the eggs I used for my "stations" are quite colorful.  In each egg is a picture and label of the specific station.  The three blue eggs I left empty and represent the 3 days our Lord's body and soul were separated from each other (also known as "death").  With these eggs we discuss that Jesus "descended to the dead" (not hell) and preached to those already passed away and whomever chose to follow Him, then went to heaven and those who refused Him went...downtown so to speak. ;)

The golden egg...ahhh the golden egg!  Well you can imagine what that is!  That's our Resurrection Egg!  You can't talk about Jesus' way of the cross without adding the END of the story...His glorious resurrection!  In this egg, I have a picture of the risen Christ.  Sometimes I add the word "Alleluia" and we talk about how we cannot say "Alleluia" during Lent but on Easter Sunday we get to say it again!  Sometimes, I simply add a small piece of chocolate because there is nothing sweeter than the end of this beautiful story!  Is there?  So part of the fun of the stations is always discovering what Mom put the golden egg!

Tip: To stuff the stations eggs, I actually just did a google images search and found pictures of the stations that I liked, copied and pasted each station, one by one, into a powerpoint document, resized to make it small enough for the egg, printed, cut out and placed in the corresponding numbered egg. Below is an example of how I did this, however I do not have the permission to share these pictures for public reuse, so I can only show you how I did this for my own personal use.  Feel free to do your own google search and find pictures that fit your family's style and your goals! 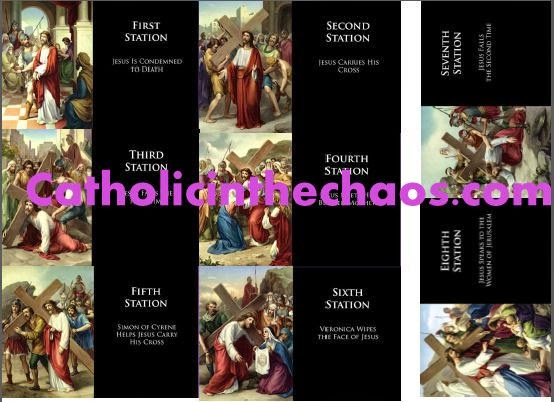 I then made additional pictures, one for each station, that represents each station.  I used pictures from Microsoft's powerpoint clipart which is available to the general public therefore I can share them with you.  If you would like your own clean copy, you can grab it here! 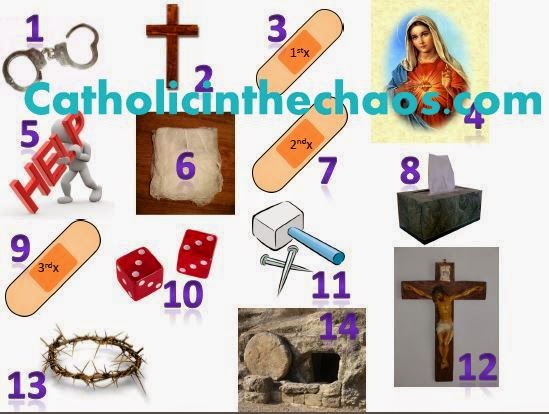 What do all the pictures mean?  Here's a quick cheat sheet for you:
1.  Handcuffs represent when Jesus when bound up and condemned to death.
2.  Wooden cross represents when Jesus picked up His cross.
3. 7. 9. Each band aid represents the times Jesus fell.
4.  A picture of the Immaculate Heart of Mary represents when Jesus met His mother along His way to Calvary.  We also discuss how her heart was breaking watching her son suffer so!
5.  HELP represents Simon of Cyrene who helped Jesus carry His cross.
6.  Cloth represents the cloth Veronica with which she wiped Jesus' face.
8.  Tissues to represent the weeping women Jesus meets and comforts along the way.
10. Dice to represent how Jesus was stripped of His clothing and then His clothes were "won" by a dice game.
11.  Hammer and nails represent Jesus being nailed to the cross.
12.  Crucifixion picture to represent His death on the cross.
13.  Crown of thorns to represent Him being taken down from the cross, de-clothed and re-clothed, prepared for burial. (I know this isn't the best picture representation but I had a hard time thinking of something to represent taking Him down from the cross)
14. Tomb to represent how Jesus was placed in a tomb.

Ok so...what do we do with these eggs? Well we have used them several different ways so far:
So that's it!  So far these are the ways we have been participating and praying the Stations of the Cross with my little guys (well really only my 4 year old b/c my now 5 month old, well he's just there to listen)!

Have other ideas?  PLEASE DO SHARE by commenting below!  I'd love some more clever ways to use this egg set!

Email ThisBlogThis!Share to TwitterShare to FacebookShare to Pinterest
Labels: family, Lent, Stations of the Cross, traditions